Davide was given the award for “his exceptional contributions to developing the theory of extreme values for dynamical systems and its use for analysing the underlying properties of the dynamics of the atmosphere and the climate system.”

On its website, the European Geosciences Union offers further detail on the background to the award, and the work for which Davide has been honoured:

“After obtaining his MSc degree in physics at the University of Bologna, he completed, in 2013, his PhD degree in meteorology at the University of Hamburg in only 2.5 years with a thesis on ‘Extreme Value Theory for geophysical flows’. In his thesis, he demonstrated the link between the shape parameter of the extreme value distributions and the local dimension of the underlying attractor of deterministic dynamical systems. He then developed techniques to extract information on the underlying properties of attractors from time series and applied them in a wide range of fields from turbulence to atmospheric and climate dynamics. This method does not require embedding and can therefore be applied in high-dimensional systems. Combined with estimates of persistence, this result provides a direct assessment of atmospheric predictability and of recurrences of meteorological patterns. He also obtained experimental evidence of the existence of a random attractor in a fully developed turbulent swirling flow, opening the way to low dimensional modelling of systems featuring a large number of degrees of freedom and multiple quasi-stationary states.

Most of the theoretical results of Faranda’s PhD thesis were collected in a book on the application of Extreme Value Theory to dynamical systems. He has an outstanding record of publications in a wide range of subjects covering mathematics, dynamical systems, turbulence, statistical physics, climate, finance and biology, reflecting his very broad interest, his creativity and his technical versatility. All these important achievements already make him a key player in the fields of nonlinear sciences.” 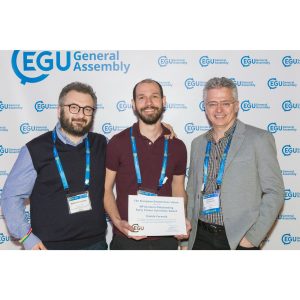