The final event of Season 2 of Science on Screen saw LML Resident Fellow, Alex Adamou, present Michael Crichton’s 1973 directorial debut, Westworld. Alex argued that the genre of science fiction, by creating models of reality with adjustable parameters, is more an exploration of society and the present than of science and the future. He drew parallels between scientific models and fictional narratives as human attempts to identify what is stationary about their time-varying environment. He argued that describing intelligence as either “natural” or “artificial” implies a false distinction. This may not create robust narratives about a future in which the cognitive abilities of computers may soon resemble those of humans. He noted that false distinctions lead to bad science, as the scientists of Westworld discovered to their cost. [Presentation Slides] 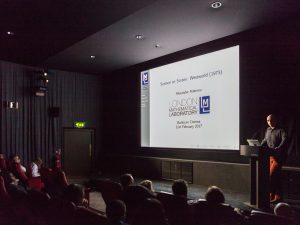 Series 3 of Science on Screen will commence on 25th April. Opening the third series will be Nobel Prize-winning biologist and President of The Royal Society Sir Venki Ramakrishnan. Sir Ramakrishnan will grapple with the philosophical questions raised by Steven Spielberg’s expressionistic adaptation of Philip K Dick at this special screening of Minority Report. Tickets available through the Barbican website.