Solar radiation and the earth’s rotation are the primary drivers of large-scale atmospheric motions, while turbulence adds a layer of complexity at small scales. This picture is further complicated by ocean–land interactions, vegetation, anthropocentric forcing, and the hydrological cycle. Understanding both the transient (i.e. meteorological) and mean (i.e. climatic) properties of this system is one of today’s major scientific challenges. Atmospheric dynamics are described by a set of partial differential equations, and take place in an infinite-dimensional phase space.

However, the actual trajectories followed by the system appear to be constrained to a finite-dimensional phase space, i.e. a strange attractor. The dynamical properties of this attractor are difficult to determine due to the complex nature of atmospheric motions. A first step to simplify the problem is to focus on observables linked to phenomena that affect human welfare and activities, such as sea-level pressure, 2 m temperature, and precipitation frequency. We make use of recent advances in dynamical systems theory to estimate two instantaneous dynamical properties of the above fields for the Northern Hemisphere: local dimension and persistence. We then use these metrics to characterize the seasonality of the different fields and their interplay.

We further analyse the large-scale anomaly patterns corresponding to phase-space extremes – namely time steps at which the fields display extremes in their instantaneous dynamical properties. The analysis is based on the NCEP/NCAR reanalysis data, over the period 1948–2013. The results show that (i) despite the high dimensionality of atmospheric dynamics, the Northern Hemisphere sea-level pressure and temperature fields can on average be described by roughly 20 degrees of freedom; (ii) the precipitation field has a higher dimensionality; and (iii) the seasonal forcing modulates the variability of the dynamical indicators andaffects the occurrence of phase-space extremes. We further identify a number of robust correlations between the dynamical properties of the different variables.  More information and the full text is available here (open access): 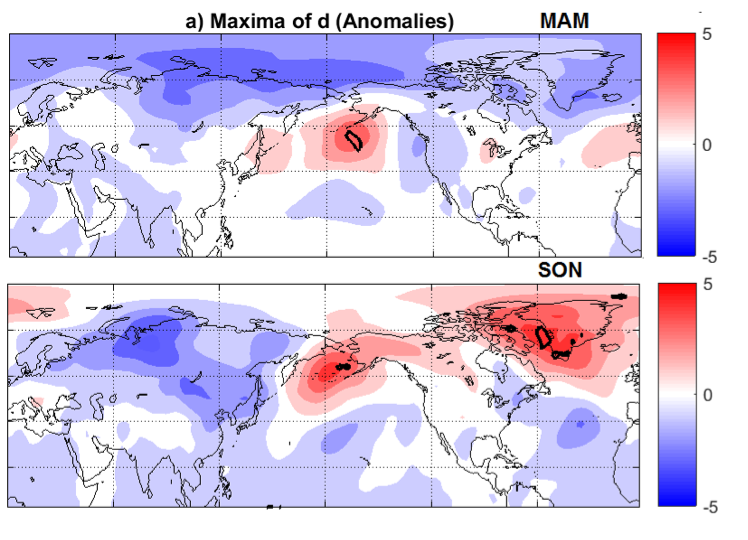 Summary of the Discussion on Large-Scale Atmospheric Extreme Weather Events...

Scaling Behaviour in Mathematical Models of Aggregation
Scroll to top
We use cookies to ensure that we give you the best experience on our website. If you continue to use this site we will assume that you are happy with it.Ok