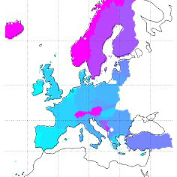 In recent decades, the frequency of extreme snowfall events – often entailing considerable human and economic costs – has remained mostly unchanged, despite consistently rising global temperatures. This is puzzling, and has been seized upon global warming denial groups as evidence countering the consensus view on climate change and its causes. If temperatures are rising, why don’t we see a sharp decrease in the frequency and intensity of snowfall?

In a new paper, LML External Fellow Davide Faranda and colleagues examine this mystery. As they conclude, the naïve expectation that warmer temperatures should mean less snowfall overall seems to be valid, but that’s not always true for extreme events, which have a far more complex connection to changes in average global temperature.

The authors focus on understanding changes in daily heavy snowfalls at the scale of European regions and countries, and note that the link between snowfall and temperature is far from simple. Daily extreme snowfalls result from the interplay of both dynamical and thermodynamic factors acting at vastly different scales of space and time. The persistence of convective snowfalls for several hours in the same region can provide large snowfall amounts detectable at daily timescales. At synoptic scales, snowfalls are driven by extratropical cyclones (∼1000 km in extent and lasting  2–6 days) traveling southwards in jet stream meanders formed by the disruption of the normal westerly flow. Oscillations of the jet stream are associated with low-frequency variability of weather patterns that can modulate daily synoptic fields and snowfall events. These conditions create a dipole consisting of high-pressure structures over some regions and low-pressure systems (extratropical cyclones) traveling southward in other regions.

Using simulations and analysis of long term atmospheric data, the researchers identify a number of specific geophysical feedbacks which appear to magnify the chance of extreme snowfall events with rising temperatures. In one area analysed – the Balkans – an interplay of atmospheric circulation and thermodynamic factors appears to explain the observed positive trends in maximum snowfalls. Another factor is the increasing strength and persistence of winds blowing from sea to land, which favours the advection of moisture and the formation of convective precipitation, which can end up as snow. Overall, a set of varied thermodynamic and dynamic effects seems to contribute to observed trends, although it is difficult to understand which factor prevails in any particular case.

The spectral density of dense random networks and the breakdown of the Wigner...
Scroll to top
We use cookies to ensure that we give you the best experience on our website. If you continue to use this site we will assume that you are happy with it.Ok