The switching between zonal and blocked mid-latitude atmospheric circulation: a dynamical system perspective 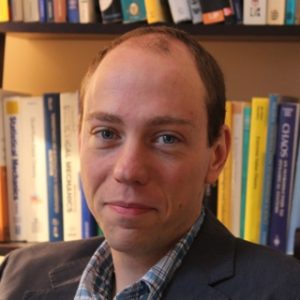 LML Fellow Nicholas Moloney co-presented a poster with Davide Faranda on The switching between zonal and blocked mid-latitude atmospheric circulation: a dynamical systems perspective based on a paper with the same title published in Climate Dynamics (http://dx.doi.org/10.1007/s00382-015-2921-6).

Atmospheric mid-latitude circulation is dominated by a zonal, westerly flow. Such a flow is generally symmetric, but it can be occasionally broken up by blocking anticyclones. The subsequent asymmetric flow can persist for several days. In this paper, we apply new mathematical tools based on the computation of an extremal index in order to reexamine the dynamical mechanisms responsible for the transitions between zonal and blocked flows. We discard the claim that mid-latitude circulation features two distinct stable equilibria or chaotic regimes, in favor of a simpler mechanism that is well understood in dynamical systems theory: we identify the blocked flow as an unstable fixed point (or saddle point) of a single basin chaotic attractor, dominated by the westerlies regime. We also analyze the North Atlantic Oscillation and the Arctic Oscillation atmospheric indices, whose behavior is often associated with the transition between the two circulation regimes, and investigate analogies and differences with the bidimensional blocking indices. We find that the Arctic Oscillation index, which can be thought as a proxy for a hemispheric average of the Tibaldi–Molteni blocking index, tracks unstable fixed points. On the other hand, the North Atlantic Oscillation, representative only for local properties of the North Atlantic blocking dynamics, does not show any trace of the presence of unstable fixed points of the dynamics.

Warwick University & LML
Real World Risks and Extremes: Correlation...
Scroll to top
We use cookies to ensure that we give you the best experience on our website. If you continue to use this site we will assume that you are happy with it.Ok